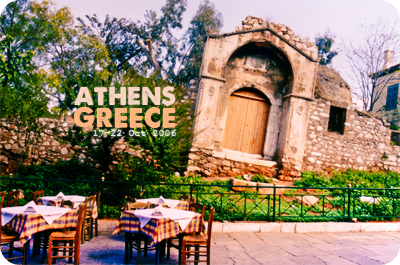 It’s funny. I’m looking back at my journal entry for this trip, written just a day after I got back, and it’s so different from what I feel about it now, five years later.

My thoughts back then were that Athens wasn’t a very pretty city, that it was loud and dirty, and not very interesting, and neither was Model United Nations—which was what we’d come for in the first place. But I’m jumping ahead.

It had all started months earlier, when our History / PoliSci teacher told us about Model UN, a concept none of us had ever heard of. Not many people seemed genuinely interested, and it was more for the students a year above us, but she wanted to give us the chance to participate anyway. Four of us were interested, and after much discussion, many afternoon meetings, and hours upon hours of research, we were ready. We’d chosen to represent Israel—not a very wise choice in retrospect, but we had been learning about the country and its history for weeks in class. That one odd choice aside, we didn’t have much of a problem deciding who would do what, cover which topic, and work in which commission. I ended up in a Special Conference on Health, something I was very much interested in. Funny enough, I don’t even remember what my exact subject was; something to do with genetic manipulation and stem cell research, surely. More research followed, even a visit at the Israeli Embassy in Berlin (which would deserve its very own entry here, if I could only remember anything beyond the intimidating security measures), then the drawing up of resolutions and proposals, and before we knew it, the new school year had started, we’d moved on to the final two years of school (the most imporant years for a young student in Germany), and then it was October and we were going. (‘Us’ being the three aforementioned classmates of mine, as well as four girls a year above us, and our teacher.) 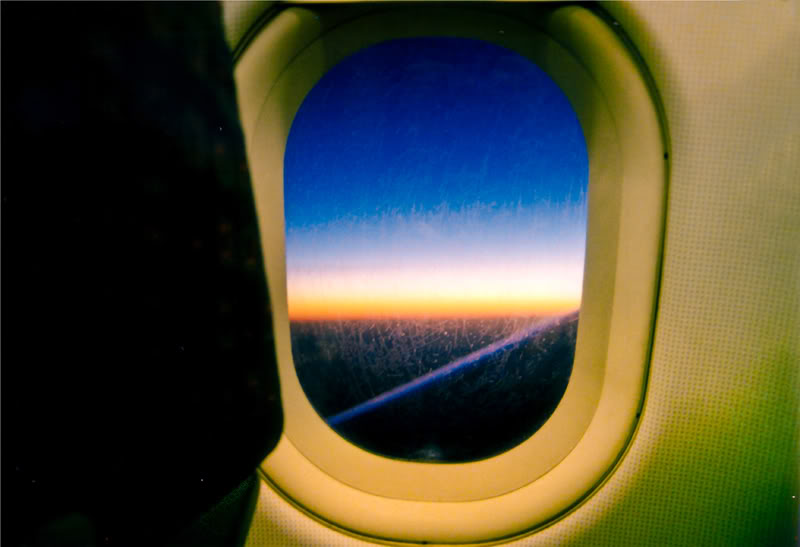 On the plane, with a strange sense of foreboding.

Outfitted with a brand new suit (the first semi-official clothing I ever owned), I went to the airport, more nervous than ever before. This wasn’t just another school trip. This was real and exciting and terrifying. Once there, we knew we’d be mostly left to our own devices, to deal with any problems that came up while playing diplomats. But first, there was the trip, fairly uneventful, as plane rides often are. We arrived at the hotel around midnight. It was the most spectacular hotel I’d ever stayed at, everything meticulously clean, and there was even a bath tub. We went out for (fast-)food, a place apparently called Goody’s, and then hit the sack.

I think the first day wasn’t yet filled with Model UN dealings, but with sight seeing. We went on the Acropolis, and from my notes, I gather I wasn’t too impressed with it, calling the Parthenon ‘a boring old building on a hill’. Well. We then climbed a fairly steep hill to have a wonderful view over the city. What surprised me most about Athens was how white the entire city was. All buildings seemed to be made from the same material, a white-greyish stone that changed colour depending on time of day and cloud cover. There wasn’t much going on that first day; Philipp, Alex and I headed out again for a while when the others returned to the hotel, but other than that, it was a quiet first day. 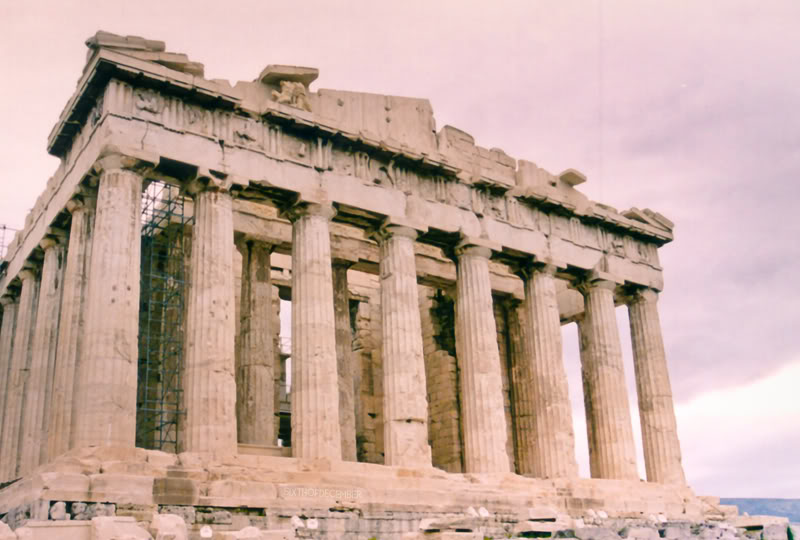 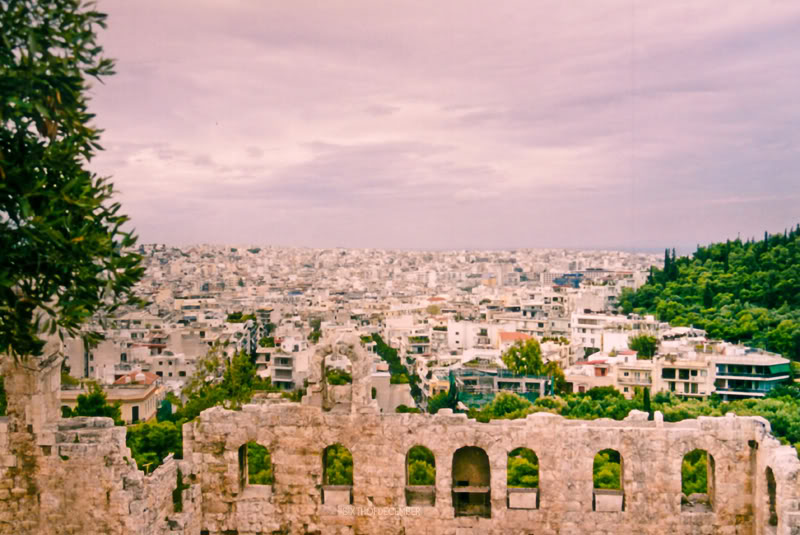 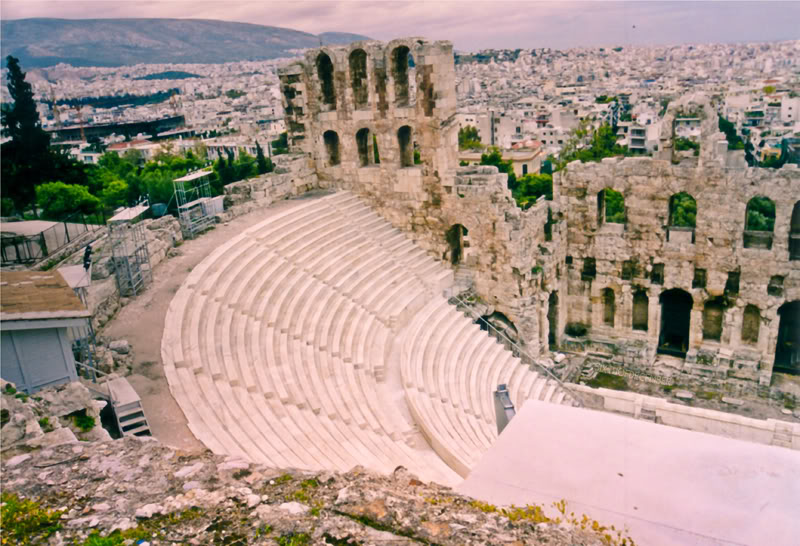 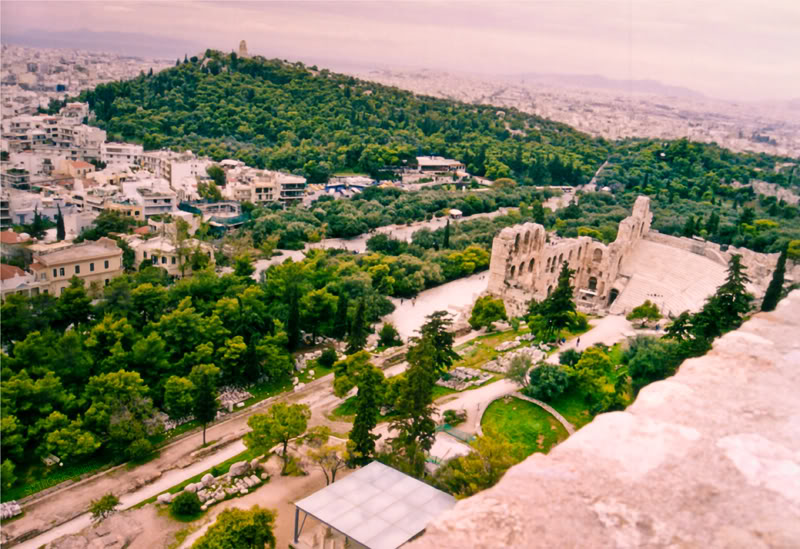 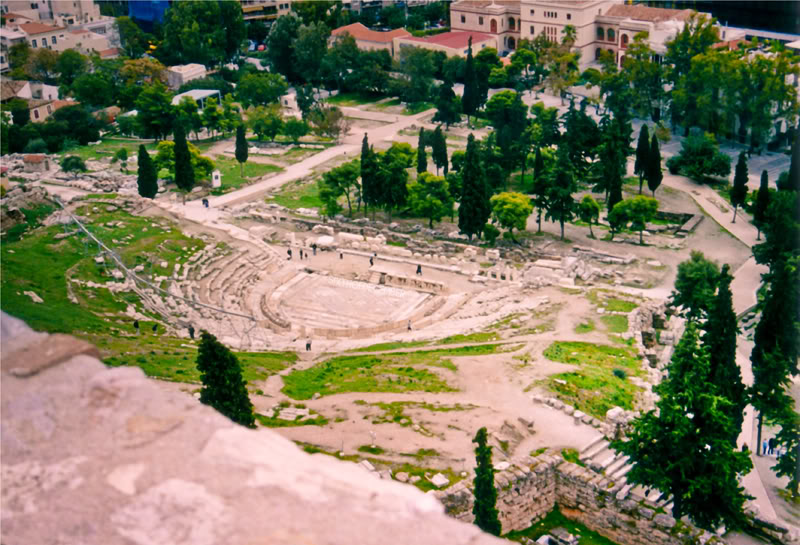 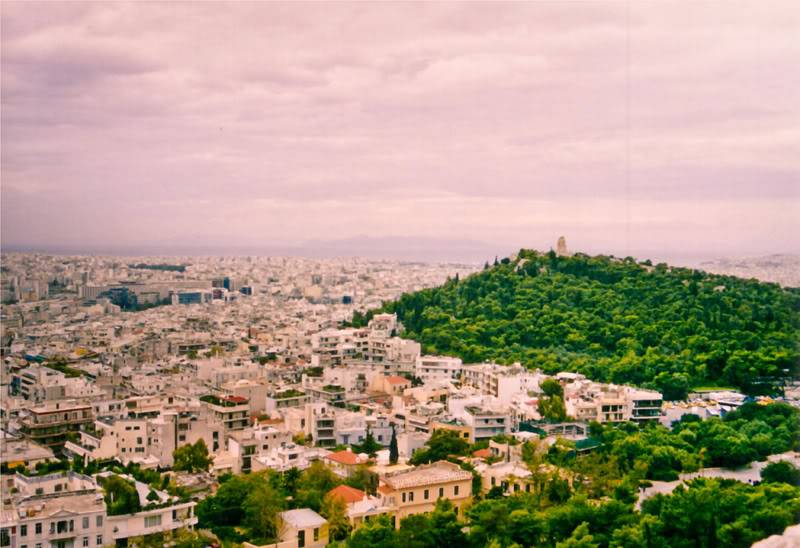 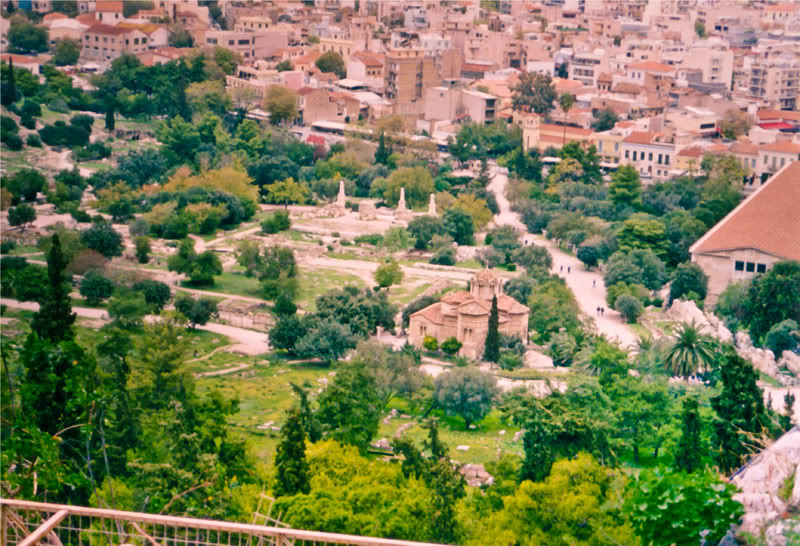 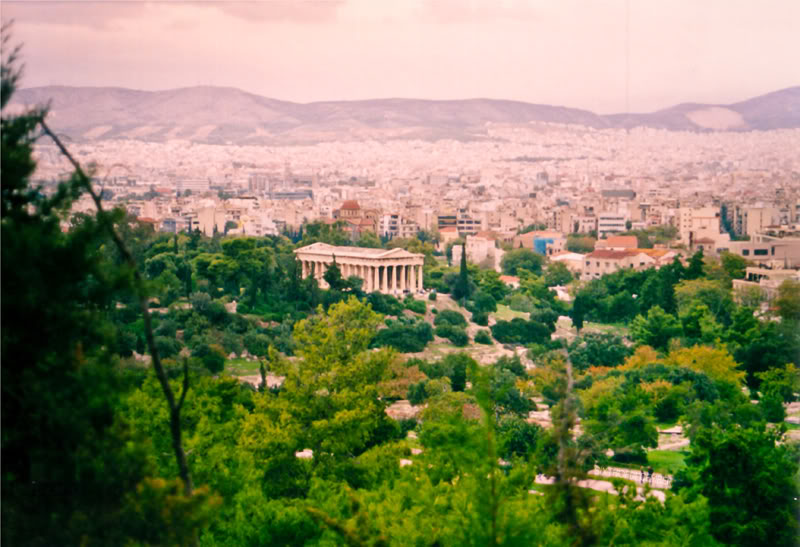 I loved the contrast between greens and yellows/beiges in the old town. View from a hill we climbed.

Day two would change all that, and we knew that well in advance. Day two of the trip was day one of the Model UN Conference. All of us almost sick with nervousness (or maybe that was just me), we were dropped in front of the German School, just in time for the opening ceremony. Which, according to my journal entry, was also not very exciting, to say the least. Apparently, each delegation gave a minute-long speech, but since there were obviously many, many countries represented, it took quite a while. After that, the actual process started, the thing we’d come for: Lobbying. I don’t think I was sufficiently prepared, but somehow, it was actually fun, if my past self is to believed (which I somehow doubt, now). I talked to the delegates representing Ghana, South Africa, New Zealand, Switzerland, the UAE, Iran, and Australia. Theoretically, lobbying is supposed to involve the serious discussion of important points and the merging of drafts that would eventually lead to a proper resolution, amended until it was either passed or vetoed. And that was also what happened in reality… sort of. Instead of staying true to our roles as delegates of our countries, we came together more as our true selves, genuinely striving to come up with a resolution worthy of being passed by the Grand Assembly later. And pass it they did. I’m not sure anymore how long we spent on which part of the process, I only remember volunteering to print the final resolution, which involved running around the entire school complex to get a signature here and a stamp there many, many times. So many that the other delegate who had volunteered and I were terribly late for General Assembly. Ah, the joys of make-believe diplomacy. The last day apparently didn’t see much action beyond the (equally boring) closing ceremony, and my notes say that I spent most of the time set aside for last-minute lobbying ‘talking to Iran’. 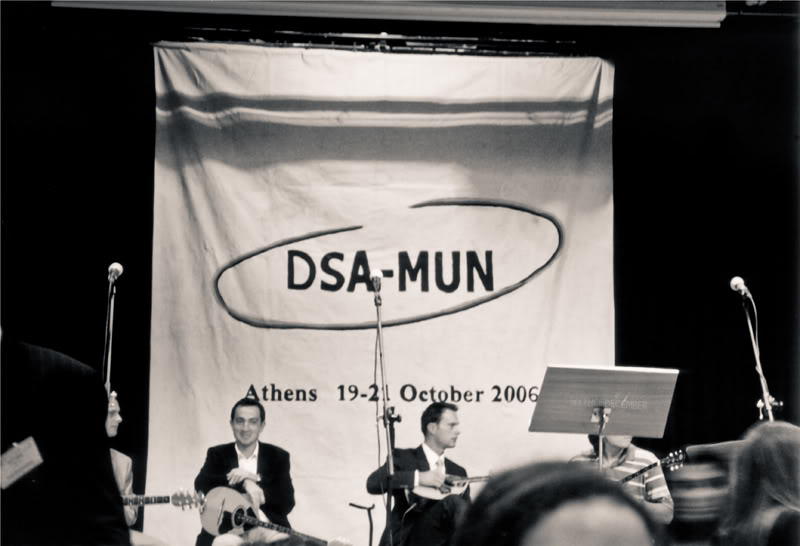 That last day of UN-business ended at a club, which, if you know me, will likely make your jaw drop now. Truth be told, I hadn’t planned on going, but Ana, the girl from my year, really wanted to go but couldn’t afford it, so we all chipped in and got her a ticket, and since I would’ve been the only one not going, I decided to swallow my pride and join the rest. I had to borrow club-appropriate clothes from the other girls, and watching them get ready was actually kind of fun. The club was nice enough, for a club, but nonetheless I knew straight away it wasn’t something I’d ever be interested in. We left fairly early, and that was that. 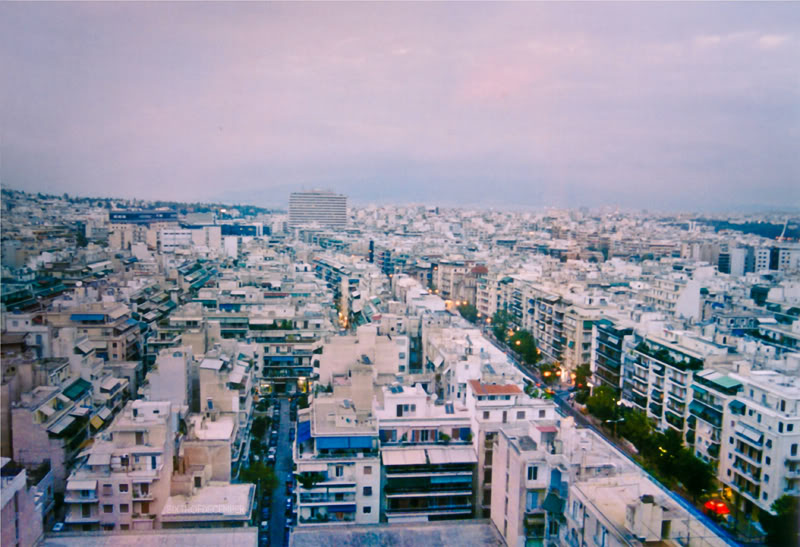 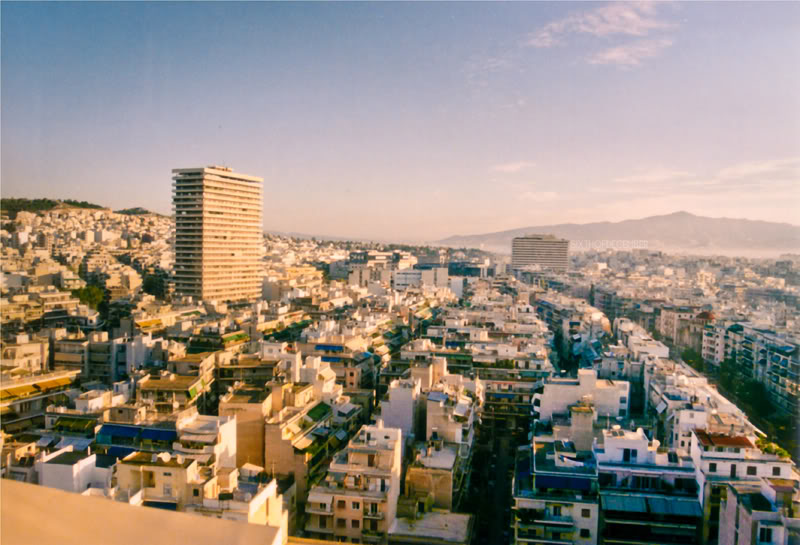 View from our hotel room during the day and at sunrise.

The actual last day was spent walking about Athens old town some more, and Plaka really is gorgeous, there is no other word for it. Tiny, tiny alleys—that, weirdly enough, had nothing in common with Italy’s tiny, tiny alleys but their tiny-ness—, colourful buildings (it is entirely possible that Plaka alone has more colours than all of the rest of Athens combined, as far as buildings go), countless shops, cute little cafés… Long story short, everything you could ever need as a tourist. At some point, I believe we split up, and I have hilarious memories of dog-howling sounds, very weird arm flailing, and our teacher telling us she’d been completely ‘spaced out’ the night before, without even realising the word she’d used made us think more of ‘wasted’ than of ‘exhausted’. There may or may not have been fist-biting and laughter-induced tears involved, but on that, I will take the fifth. Either way, the last day was the best, without a doubt. 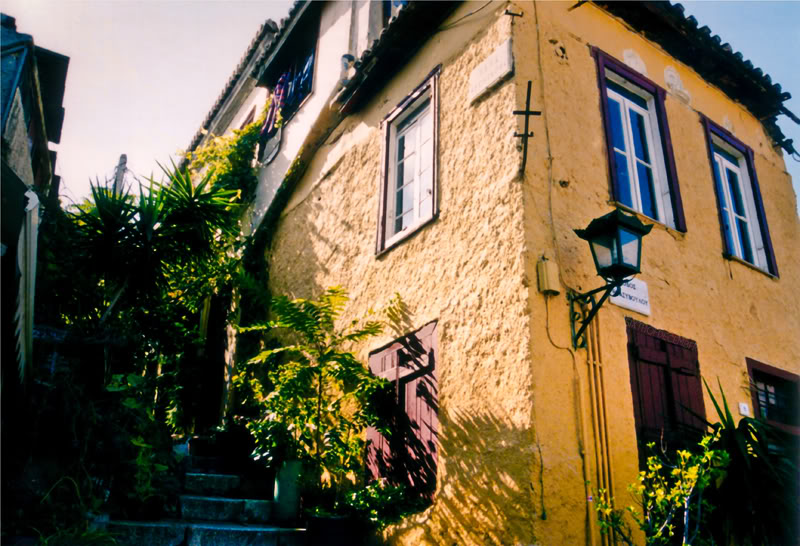 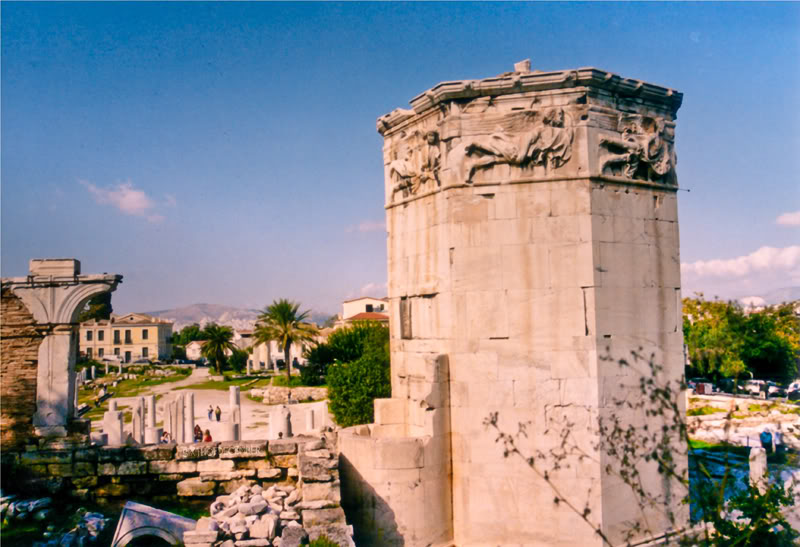 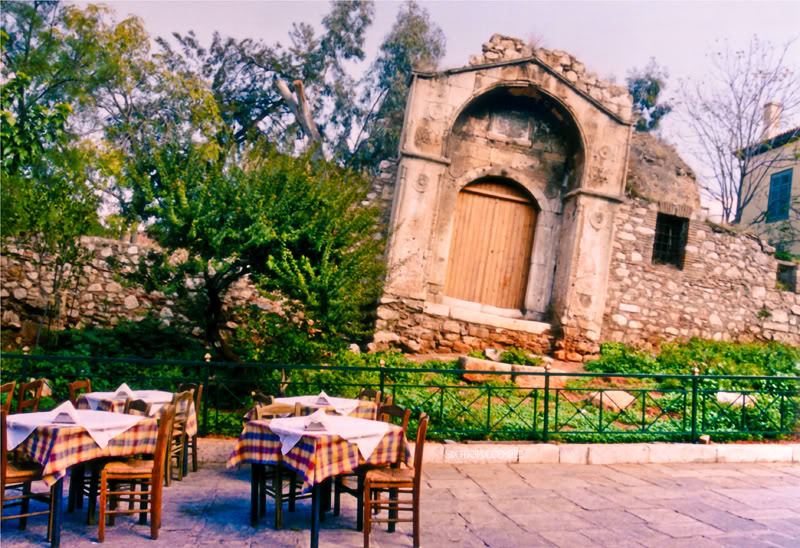 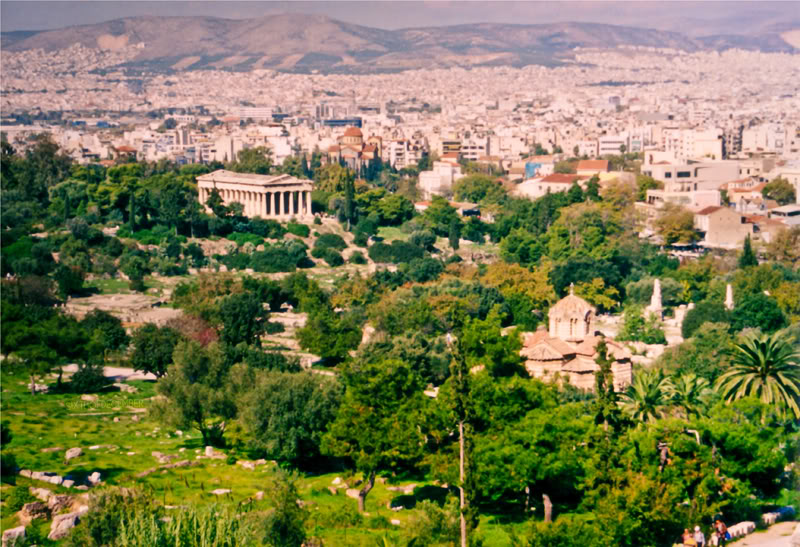 View from another hill. 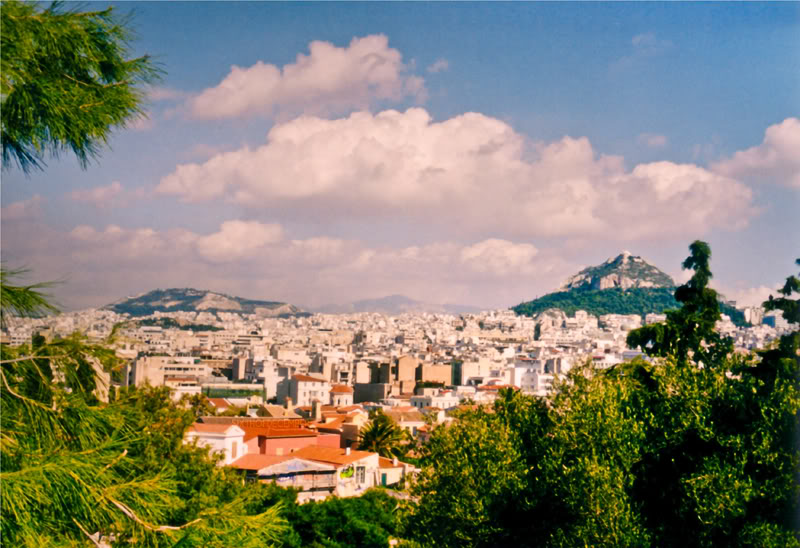 And to the right the aforementioned hill we climbed early on.

According to my notes, the flight back was nice, even though I spent half of it sitting next to Philipp who was caffeinated out of his mind and even more chatty than usual. And then I was really sad to be back home.

Other random memories that I can’t quite place anymore include a dinner we all had together one evening and a local restaurant, and another late-night snack at Goody’s. And then there was La Tarantella, which became our theme song for the entire trip very early on, possibly as early as the first night on the way from the airport to the hotel. You see, Philipp has this knack for making music using only a fingernail and his teeth. Don’t even ask, it’s hilarious, and he can play whole songs that way. And somehow, through some weird coincidence, he ended up playing a Tarantella, and that just stuck.

To date, this is the best trip I’ve ever taken, clammy hands in lobbying sessions and annoying parents attempting to monitor my every move from more than thousand miles away notwithstanding.

© Isabella Valenza; all rights reserved. Do not repost or copy without permission.